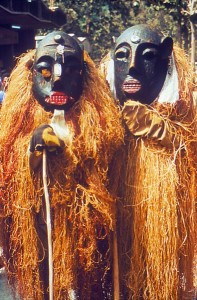 Once again an article comes my way that makes me think that we need a “We Can’t Make this stuff up” file.  Then I think again and decide “naw” and toss it into our “It’s a Strange World after all” file because its obvious we didn’t make it up.

This story ONLY goes to show us that  the taxman will be in your pocket sooner or later . . . no matter how strong your voodoo be . . . .  EDITOR

(Reuters) – A Swazi Member of Parliament has urged the government to hike taxes on traditional healers and soothsayers to help solve a funding crisis in Africa’s last absolute monarchy. . . . Read Complete Report

This is a bad-ass musical production.

Thanks titans for a great remix of a great song!. . . EDITOR

PLEASE READ BEFORE YOU WATCH!
The music in this video is Witch doctor (remix). You’ll mostly see cyborg and starfire because their the ones singing it or are the main singers. Since this is kinda of a love, rock and funny song then this is the list of couples in the song:
Rav/Rob
Star/Rob
BB/Terra
Star/ Cyborg
I am just making things up so I’m not supporting any couple (mostly)…and the fact that the people in the video keep changing partners make no difference because their all just friends in the show. So this video also shows some weird clips of the teen titans, I put those clips there because of this part in the song (ooh…eeh…ooh…ahh…ahh…ting…ting…ting…walla…lah…lah…bang…b­ang…ooh…eeh…ooh…ahh…ahh…ting…ting…ting…ting…dang) btw Terra is still a titan so I put her in the video. Oh…and don’t mind the fact that when the song gets to the part of (Alvin…Simon…Theodore) Terra was pointing to cyborg, raven and starfire. Just to tell you there are three witch doctors in this video. . . . posted with video.

Category: It's a Strange World After All, The Humor of it All /