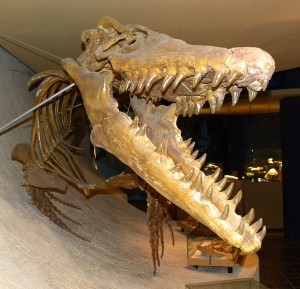 CREDIT:  Mark A. Wilson (Department of Geology, The College of Wooster) SOURCE Wikipedia.

It’s not quite Nessie, but it’s close.

Fossils belonging to an 84-million-year-old freshwater sea monster have been found in Hungary, according to a new study. (Explore a sea monster interactive in National Geographic magazine.)

The recently unearthed creature belongs to a family of ancient aquatic reptilesknown as mosasaurs, which looked like crosses between crocodiles and whales. Mosasaurs lacked the superlong necks found in plesiosaurs, which the legendary inhabitant of Loch Ness is alleged to be. . . . Read Complete Report