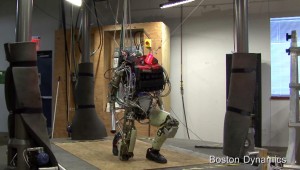 Pentagon’s Defense Advanced Research Projects Agency and the team at Boston Dynamics revealed the new robot which is outfitted with systems that “simulate human physiology”. Known as the Protection Ensemble Test Mannequin –or PETMAN robot for short, can run, jump and even splits. RT’s Meghan Lopez explains what this device can supposedly be used for.