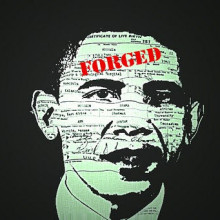 “There is a problem with President Barack Obama’s long-form birth certificate: It’s a forgery, say multiple forensic experts who have examined it. A report detailing the evidence will soon be presented to Congress. . . .

“Why would these experts risk their reputation and also commit perjury? It is therefore kookier to disregard these assessments summarily than to view them with an unbiased eye”. . . . Read Complete Report

These latest meetings were asked for and arranged by the VIPS. Zullo will be answering all their questions and presenting the entire criminal case for their review. It has been reported many times on PPSIMMONS News and on the Freedom Friday With Carl Gallups radio program that Sheriff Arpaio, investigator Zullo, and Gallups have been feverishly working for the last 5 months or so to get this case before a congressional investigation committee. Some months back Zullo and Gallups attended CPAC 2013 and met with congressmen on Capitol Hill and at CPAC. Those meetings have opened several very important doors that are leading this case closer and closer to a full blown congressional investigation. . . . Read Complete Report