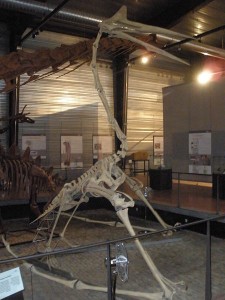 Photo:  Fossil of Quetzalcoatlus, an extinct pterosaur. CREDIT: Ghedoghedo SOURCE: Wikimedia Commons. Permission is granted to copy,distribute and/or modify this document under the terms of the GNU Free Documentation License,

Published on Sep 29, 2012 by EvolutionDocumentary

Broadcast 2011. When dinosaurs walked the earth, monsters ruled the skies
For thousands of years, humans have believed that there were once flying monsters. But did they really exist beyond our nightmares? 220 million years ago dinosaurs were beginning their domination of Earth. But another group of reptiles was about to make an extraordinary leap: pterosaurs were taking control of the skies. The story of how and why these mysterious creatures took to the air is more fantastical than any fiction. . . . Continue text posted with video on youtube