Ancient Brazilian Carving Believed to Be Among World’s Oldest 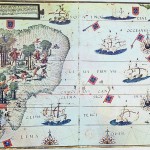 Bet this find has made the “experts” who try to make everyone believe that South America was a vast empty space void of human life (except for “a few savages”) until Europeans came nervous. The so-called “discovery” competently ignoring the fact that there was a larger population in the America than Europe when the first invaders arrived. . . EDITOR

Scientists in Brazil announced Tuesday they’ve discovered rock engravings that could be up to 12,000 years old, meaning people may have settled the Americas up to 4,000 years earlier than previously thought.

Researchers from the University of Sao Paulo say the anthropomorphic figure “could be the oldest figurative petroglyph ever found in the New World” and called it the “earliest indisputable testimony of rock art in the Americas.”

The figure was found in Brazil’s Lapa do Santo rock shelter, about 300 miles north of Rio de Janeiro. The researchers say the nearly foot-long figure was “pecked in the bedrock,” and the human-like figure has “tri-digits, a “C”-like head, and an oversized phallus.” . . . Read Complete Report w/ photos