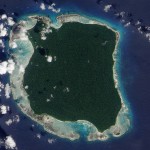 “The undisturbed appearance of the island’s forest might suggest it is uninhabited, but in fact, North Sentinel Island is home to one of the few remaining primitive tribes on Earth—hunter-gatherer tribes which have had little or no contact with modern civilization. The Indian government, which oversees the Andaman Islands territory, prohibits visitors of any kind, and the islanders themselves violently rebuff any attempts at contact. Following the 2004 tsunami, the Indian Coast Guard flew a reconnaissance mission over the island; according to news reports and photos, men emerged from the forest and fired arrows at the helicopter, which did not attempt to land.” . . . Wikipedia

Located off the coast of India, North Sentinel Island is a distrubing anomaly. Mysterious people live on it, but all attempts to contact them have gone disastrously wrong, and they attack any outsiders with unparalleled ferocity. So what’s going on at the island? . . . From Description published with video.

“Stuff They Don’t Want You to Know”