END_OF_DOCUMENT_TOKEN_TO_BE_REPLACED

What does it take to change the minds of world class curmudgeons? World class evidence!

For decades, if not centuries, we’ve been fed this idea that our progenitors were stupid brutes. The idea that people, even a few individuals, of previous eras could be anywhere near as smart as our current crop of academicians was cause for guffaws from said academicians. Time to listen up, boys and girls, your great grand daddy was a lot smarter than you used to think and probably was smarter than you are now. That is, ancient man seems to have been able to navigate without tools, math, or maps, using only his innate senses to guide himself and his vessel across open water. The alternative is that he had those things. Either way, he could do something we didn’t think he could until now.

The Island of Cyprus is not within sight of any mainland anywhere. It’s about a hundred miles from the nearest coast. In order to reach Crete by any known transportation means requires a set of complex skills related to operating a vessel or vehicle and navigation of that craft, itself a set of complex mathematical and spatial relationship skills. END_OF_DOCUMENT_TOKEN_TO_BE_REPLACED 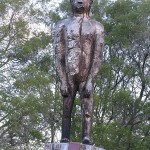