END_OF_DOCUMENT_TOKEN_TO_BE_REPLACED

I wonder how much of this story will be covered by the MSM?. . . EDITOR

From BrasscheckTV via youtube submitted by Luke Lopez on Jun 30, 2014

Image Below: “The Sinaloa Cartel has a presence in 17 Mexican states, with important centers inMexico City, Tepic, Toluca, Zacatecas, Guadalajara, and most of the state ofSinaloa.[27] The cartel is primarily involved in the smuggling and distribution ofColombian cocaine, Mexican marijuana, methamphetamine and Mexican and Southeast Asian heroin into the United States.[28][29]  SOURCE: Wikipedia (Public Domain) 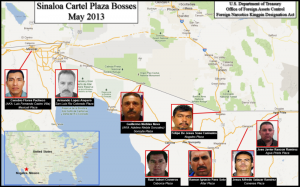 Photo: Culiacan, Mexico. Home Base of the Sinaloa Cartel.  CREDIT. This work has been released into the public domain by its author, Zero Gravity at the wikipedia project.

Mexico’s drug war has cost 70,000 lives, yet drugs still flood across the border. Here’s how the Sinaloa cartel prevailed.

Badiraguato, a town of 7,000 in Sinaloa state, shouldn’t have such wealth. It’s among the poorest municipalities in Mexico. But you’re better off not asking questions here. . . . Read Complete Report

The Federal Reserve, a Privately Owned Banking Cartel, Has Been Given Police Powers, with Glock 22s and Patrol Cars (W/Videos)

My question – is the privately owned Central Bank, the so called Federal Reserve Bank, paying for this new “Federal Police Force” or are we the people paying? Of course, in the end, anything the FED spends money on comes out of the pockets of we the people, in the form of the interest we are charged by the private owners of that private bank to borrow our own money. . . EDITOR

By mid morning on Monday, September 17, as Occupy Wall Street protesters marched around the perimeter of the Federal Reserve Bank of New York, all signs that an FRPD (Federal Reserve Police Department) existed had disappeared.  The FRPD patrol cars and law enforcement officers had been replaced by NYPD patrol cars and officers.   That decision may have been made to keep from drawing attention to a mushrooming new domestic police force that most Americans do not know exists. 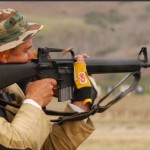