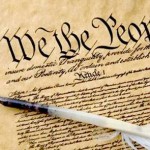 From Last Resistance by Frank Camp posted 17 Hours Ago

“According to Town Hall:

““An Illinois Social Studies teacher faces disciplinary action for reminding his students of their Fifth Amendment rights when filling out a school survey on behavior…John Dryden was collecting the surveys before class when he noticed the students’ names were printed on them. He looked to see what was being asked and noticed questions about alcohol and drug use…Dryden told his students that they had a Constitutional right to not incriminate themselves by answering questions on the survey.””

“As a result of Mr. Dryden informing his students about their basic Fifth Amendment rights, he is now facing disciplinary charges. Lucky for him, numerous people have risen to his defense.” . . . Read Complete Report

Teacher in trouble for teaching rights to students

Adam gives you the low down on how teachers get spanked for TEACHING!!! Specifically about your constitutional rights.

The Constitution is one of the most important documents in the history of United States, and it’s also the subject of numerous fringe theories, allegations, rumors and dirty secrets. But what are they, exactly? Tune in for a look at some of the theories surrounding the Constitution.

For the last several years, the Federal Bureau of Investigation had been making countless requests to various companies demanding the information of certain customers. The demands came in the form of “national security letters” that were circumventing the process of obtaining a warrant or subpoena and Judge Susan Illston said the FBI’s procedures were unconstitutional and demanded the agency to stop. Kurt Opsahl, senior staff attorney for the Electronic Frontier Foundation, joins us with more.