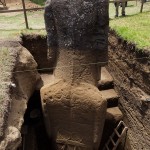 And we thought they were just busts of strange shaped heads! . . . EDITOR

Letters from the Director

“Interestingly, Rapa Nui oral traditions say that statue carvers were paid for their talent and effort in desirable food, including especially tuna and lobster. At the deepest level of our excavation this season we found tuna vertebrae!  Also, we found strong evidence of how the ancient carvers manipulated the statue to raise it upright, pivot it and drop it in a hole 1 m deep cut in bedrock.  The process left scars and indents on the statue surface.  When seen on statues lying on roads, these same sorts of scars have been interpreted by others as evidence of upright transport methods. Our excavation, however, clearly shows that such damage could have been caused in the quarry. The unpublished notes of the Mana Expedition to Easter Island (1914-15) suggested and support these findings in Quarry 2 and elsewhere in Rano Raraku. . . . Read Complete Report