EPA Decree Shrinks Size of Wyoming by a Million Acres

Why is the EPA altering state boundaries in Wyoming – and reversing over 100 years of established law?  Well, apparently the city of Riverton now falls under the jurisdiction of the Wind River Indian Reservation.  This, obviously, isn’t sitting well with the governor’s office – which is urging the EPA to reconsider its ruling and respect the rule of law.

Reacting to the decision to reduce the size of Wyoming by about a million acres, Wyoming Governor Matt Mead warned of the dangers to all Americans of this type of unilateral land redistribution by the EPA:

But, there may be much more to this story behind the scenes. Riverton is also home to scientific instrument maker Brunton, Inc., makers of the Brunton Pocket Transit. This instrument is a favorite of professionals from geology to artillery to surveying to archaeology. It’s not cheap at MSRP $820.00, but it is about the most compact instrument available combining all the same capabilities and accuracy.

The debate to this point is not whether, but how to fight the EPA decree.

One alternative has yet to surface in the press: A legally limited partnership including the city of Riverton, each of the tribes, Brunton, perhaps other local employers, and the State of Wyoming. It would enjoy governmental oversight by multiple sovereign entities under the 10th Amendment, would represent all the ostensibly interested parties and it may negate the perception of “us versus them” among the parties.

Why would Brunton be interested in partnering with the tribes? If the agreement included employment among tribe members, it would qualify for several Federal tax breaks/credits and training programs, even through advanced degrees. And the indigenous population of Wyoming has at least 5,000 years of experience in direction finding.

Is there some nefarious reason the EPA would make such a decree? Well, maybe, maybe not, but the action could have significant ripple effects throughout the scientific, navigation, military, and engineering fields.

Brunton also produces solar powered and dense battery power for remote crews, like surveyors, archaeologists, zoologists, botanists, oceanographers, geologists, nautical pilots and navigators, forward, detached, or bivouacked military, or anybody else who has to – or chooses to – live off the grid. At the very least, forcing Brunton to move its entire operation would be a significant cost added to an already premium brand of instrumentation and support gear. This is especially poignant in light of cut rate Chinese imports or even more expensive, but no more capable European varieties.

True, few people carry a pocket transit or even a simple compass in their everyday life, unless it’s built into their cell phone or vehicle. Others use it as one of the core tools for making a living.

Wyoming will almost certainly challenge the legality of the EPA ruling – and it should, simply on the basis of checks and balances. Would Wyoming play the 10th Amendment card? Would they win on that basis? Those questions are nearly impossible to predict. Whatever the outcome, this is sure to be a precedent-setting case that could potentially affect every US citizen and set a new direction for what is and is not sovereign among the various States. 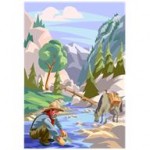 from the Gold Prospectors Association of America