Alien life probably isn’t interested in having us for dinner, enslaving us or laying eggs in our bellies, according to a recent statement by former SETI director Jill Tarter.

(Of course, Hollywood would rather have us think otherwise.)

In a press release announcing the Institute’s science and sci-fi SETIcon event, taking place June 22 – 24 in Santa Clara, CA, Tarter — who was the inspiration for Jodie Foster’s

character in the film “Contact” — disagreed with both filmmakers and Stephen Hawking over the portrayal of extraterrestrials as monsters hungry for human flesh. . . . Read Complete Report 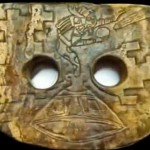 The artifacts shown were found 55 years ago by a tribe in central Mexico, they have been using many of these alien artifacts as necklaces.