If this doesn’t belong in our “Robots Replacing Humans” Archive, nothing does. Can’t wait until this is totally developed. Just think the tasks the Controllers could program into deceptive robots. . . . EDITOR

We know, we know, robots being deceptive sounds like a bad thing. Potentially avery bad thing. But the fact is, deception is everywhere, and for good reason: being deceptive is often the most efficient and effective way to protect yourself from harm. Deception is by no means unique to humans, either: animals are masters at deceiving other animals (and us), and Ron Arkin’s group at Georgia Tech has been teaching robots to learn deception from a pro: the squirrel. . . . Read Complete Report

Photo: US Flag is only flown upside down as a distress signal. CREDIT David Wagner. SOURCE: Public Domain Pictures.net

I believe the photo above should be appropriate.  But, then it has been appropriate to fly our flag in “distress” mode for a long time now. At least since “Tricky Dick” Nixon was picked by the Controllers to be the head puppet for a second term.. . . EDITOR

As of Saturday November 10, 2012, citizens from 15 States have petitioned the Obama Administration for withdrawal from the United States of America in order to create its own government.

Here’s a story you would think every one of the main stream news sources would be all over. . . the President of the United States refusing to answering a lawful subpoena to appear in court regarding his mysterious background. . . entered into evidence . . . a phoney social security number. . . experts testifying that his so-called “birth certificate” a product of Photo Shop. All of this and more. . . and the establishment press completely ignoring the Georgia court case. Do you wonder why? I don’t. And Obama. This is an election year think of all the free press this trial would give him and how popular he would become when he showed up in court with the proof of his claims in his hand. . . unless he has something to hide. . . . EDITOR

Given the testimony from today’s court case in Georgia, Obama has a lot of explaining to do. His attorney, Jablonski, was a NO SHOW as of course, was Obama.
The following is a nutshell account of the proceedings.
Promptly at 9am  EST, all attorneys involved in the Obama Georgia eligibility case were called to the Judge’s chambers. This was indeed a very interesting beginning to this long awaited and important case.
The case revolved around the Natural Born clause of the Constitution and whether or not Obama qualifies under it to serve. More to the point, if found ineligible, Obama’s name would not appear on the 2012 ballot in Georgia.
With the small courtroom crowded, several in attendance could be seen fanning themselves with pamphlets as they waited for the return of the attorneys and the appearance of the judge.
Obama himself, who had been subpoenaed to appear, of course was nowhere near Georgia. Instead, Obama was on a campaign swing appearing in Las Vegas and in Colorado ignoring the court in Georgia.
Over the last several weeks, Obama’s attorney, Michael Jablonski, had attempted several tactics to keep this case from moving forward. He first tried to have it dismissed, then argued that it was irrelevant to Obama. After that, Jablonski argued that a state could not, under the law, determine who would or would not be on a ballot and later, that Obama was simply too busy with the duties of office to appear.
After all these arguments were dispatched by the Georgia Court, Jablonski, in desperation, wrote to the Georgia Secretary of State attempting to place Obama above the law and declared that the case was not to he heard and neither he nor his client would participate. . . 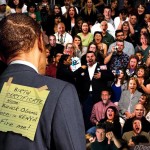 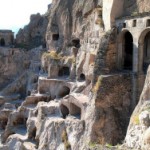 Ruins of massive cave city in Europe a site to see, but needs help.

It is off the beaten path of world tourism. Unlike the great monuments of ancient Rome, Greece, Egypt, China and Mesoamerica, it sees comparatively fewer visitors. Yet if casual tourists or expeditionary scholars were to see it, they would likely say that it is every bit as impressive as the Roman Colosseum or the Pyramids of Giza. Built astride and into the sheer cliff face of a mountain, it resembles something of a hybrid of ancient Petra in Jordan and the Mesa Verde cliff dwellings of the U.S…..or, for those familiar with the Tolkien works, a Minas Tirith in ruins. Known as the cave city or monastery of Vardzia, it was dug into the side of Mount Erusheli near the town of Aspindza and the Mtkvari river in southern Georgia during the late 12th century. Today, it is a tourist destination for Georgians, Europeans and others throughout the world who know of its existence. But some of its remarkable remains will crumble away into oblivion if expert care and conservation is not realized in full. .  . .  Read complete extensive report w/photos