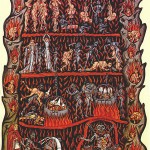 Featured Image: Medieval illustration of Hell in the Hortus deliciarum manuscript of Herrad of Landsberg about 1180. (Public-Domain)

Four Reasons Why You Are Probably Not Going to Hell

From Huffington Post by Brett Gallaher Posted: 10/24/2013 7:33 pm This may come as a shock, but despite what your ex says about you, you’re probably not going to Hell. Relieved? Good! But I hate to break it to you that your ex isn’t going to Hell either. What was that? Will you both spend eternity together in Heaven? Of course not! Then you’d both be in Hell! Are you paying attention at all? Now I know what some of you may be thinking (and that’s precisely why I won’t be replying to every comment). How can I, blogger-person, know with certainty who is and isn’t going to Hell? How can a mere mortal know such mysteries of divine judgment? Easy. I used the word probably in the title. If I’m wrong, I’m off the hook (and your ex is going to Hell. It’s a win-win). So let’s not get too hung up on “me playing God” and let’s just enjoy the show. You might learn something. Or not. . . . Read Complete Report

Category: Life Goes On / Tags: Four Reasons, Hell, Probably Not Going to, Why You Are

Part 2: Blacks trying to wake up blacks to their REAL problems: (Video Reports)

Dumb Negro’s Believing Global Warming, What are you doing to cure Climate Change, Blacks will follow Obama to HELL, No Blacks believe in Global Warming, You are not an African Americans

I Will Never Respect You Obama Idiots

I Will Never Respect You Obama Idiots, Hell Yes I’m Pissed Off, God Gave You Emotions, You Need To Get Pissed Off, I Can’t Stand Obama, The Bastard Is Evil, You Are A Freaking Idiot, Kiss My Ass, Voter Fraud, We Have A Communist President Damnit, The Race Card, Damn You People Are Stupid, Racial Slur, They Want To Kill You, Obamacare Will Bankrupt US

Illustration: Dante and Virgil at the gates of hell. By William Blake. (PUBLIC DOMAIN)

A “gate to hell” has emerged from ruins in southwestern Turkey, Italian archaeologists have announced.

Known as  — Ploutonion in Greek, Plutonium in Latin — the cave was celebrated as the portal to the underworld in Greco-Roman mythology and tradition. . . . Read Complete Report

The cave was celebrated in Greco-Roman mythology as the portal to the underworld.

While Obama starts his move to take all guns out of the hands of America’s citizen’s, the gun merchants flood the countries they feel will use them to further Agenda 21 and  the beginning of worldwide population control. . . EDITOR

Gates Of Hell Open In Africa

France is sending more troops to Mali to fight against al-Qaeda-linked militants. Paris claims the move is short-term, but delays to the deployment of an African security force have raised fears the conflict could spill over into neighboring nations.

The French government issued a statement that it would send 2,500 troops to support Malian government soldiers in the conflict against Islamist rebels. France has already deployed around 750 troops to Mali, and French carriers arrived in Bamako on Tuesday morning . . . . Read Complete Report

UN calls for ‘rapid deployment’ of international troops in Mali

The UN Security Council has called for “rapid deployment” of international forces in Mali to combat Islamist militants in the north of the country. It comes as insurgents have seized the key city of Konna as they move south.

“This serious deterioration of the situation threatens even more the stability and integrity of Mali and constitutes a direct threat to international peace and security,” Security Council President Masood Khan said in a statement following an emergency meeting on Thursday evening.

Given the latest developments in the West African country, the members of the UNSC “expressed their determination to pursue the full implementation” of its resolutions on Mali, in particular Resolution 2085, adopted in December, which authorizes the deployment of over 3,000 African-led international troops. . . . Read Complete Report

‘West created conditions for Islamists to take over in Mali’

Caves of the World: #5: The Gates of Hell ~ Exploring Mexico’s Sacred Caves

By Markus Becker in Tulum, Mexico

Mexico’s Yucatan Peninsula is dotted with thousands of caves that once housed prehistoric people and later became sacred to the Mayans. German archaeologists and filmmakers are currently involved in a project to explore with modern imaging technology and make a 3-D film of this underwater labyrinth.

A person died here hundreds of years ago. His body fell into the flooded cave and sank into the water. His flesh gradually separated from his bones. Today, he stares at divers out of empty eye sockets. His skull seems to be pushing its way out of the soil, as if he were trying to rise from the dead, to rise up from the sand, shake the tiresome sediment from his bones and escape from the silent darkness. . . . Read Complete Report