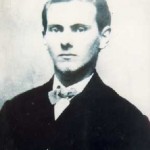 History tells us that Jesse James died in 1882, shot by a former friend, Bob Ford.  Yet many believe that James faked his death, and lived for years under the name J. Frank Dalton.

Here his story–a true story of the Weird West . . .

Jesse James reportedly belonged to a secret society, The Knights of the Golden Circle.  Other members included Jefferson Davis, Bedford Forrest, and William Quantrill (leader of the Confederate guerilla outfit Quantrill’s Raiders, with whom James rode).  Some believe the society was created by the notorious Albert Pike, the subject of many a Masonic conspiracy theory.

According to the book Jesse James Was One of His Names (written by Del Schrader, with Jesse James III), the American Civil War did not really end in 1865, but continued to be fought “underground” for 19 more years.  Its highly sophisticated spy network, operated by the Knights of the Golden Circle, continued for even longer and was involved in many subversive activities.  One of these was train robbery, a specialty of the James Gang, the purpose being to enrich the coffers of the Confederate underground.  As a Confederate agent, James was also involved in smuggling guns and ammunition to the Plains Indians, as well as providing training in guerilla tactics, for use against their common enemy, General George Armstrong Custer and the Union Army. . . . read complete report