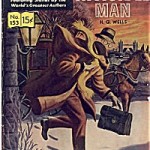 O.K. O.K. So this report isn’t about someone becoming an invisible man but I got you attention, right?  And I feel bad about that (Not Really) so at the end of this article I put a  link to a real invisible guy and a link to a free e-book of the classic novel by H.G. Wells. . . EDITOR

Not Only Invisible, but Also Inaudible

Progress of metamaterials in nanotechnologies has made the invisibility cloak, a subject of mythology and science fiction, become reality: Light waves can be guided around an object to be hidden, in such a way that this object appears to be non-existent. This concept applied to electromagnetic light waves may also be transferred to other types of waves, such as sound waves.

Researchers from Karlsruhe Institute of Technology (KIT) have now succeeded in demonstrating for the first time an invisibility cloak for elastic waves. Such waves also occur in strings of a guitar or drum membranes. . . . Read Complete Report