We’re longtime friends and fans of the MythBusters, and in celebration of their 10th year, we wanted to put together this unofficial video celebrating the all-new season that’s happening RIGHT now. Our Wednesdays are awesome again!. . . Description published with video.

vaporized by a rocket sled. 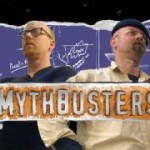 No One Injured During Mythbusters Experiment Gone Awry

By the way, I hate it when reporters misuse words like “impale“. “Perforated” is so much more accurate in this case…

“MythBusters” may be a TV hit, but the show can also check off “nearby house” from its list of targeted ambitions. Authorities in Alameda County, Calif., said a projectile fired during an experiment by the show’s cast at an area firing range accidentally missed its intended target and struck a home and a car in a nearby neighborhood, KNTV reported.According to the TV station, the Alameda County Sheriff’s Office said the cannonball pierced the wall of the home and exited through the other side damaging a vehicle.
.
To read the rest of this KNYV/WRTV story click HERE
.
Time to increase the travel budget and head to the Chocolate Mountains firing ranges…
Category: It's a Strange World After All, The Humor of it All / Tags: alameda, cannon ball, county, impale, mythbusters
Site built and maintained by Possum Holler Studios