Category: Advanced Science and Such, It's a Strange World After All / Tags: Monkeys, National Geographic, New Species 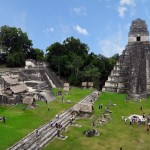 December 14, 2012—In a cave in Mexico’s Yucatán, a National Geographic explorer reveals what is believed to have been an underground observatory for witnessing the zenith passage of the sun.