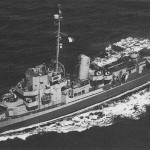 Here is  one of the most persistent legends that has refused to go away, the story of Project Rainbow and the USS Eldridge. . . . EDITOR

The Philadelphia Experiment is the name of an alleged naval military experiment said to have been carried out at the Philadelphia Naval Shipyard in Philadelphia, Pennsylvania, USA sometime around October 28, 1943. It is alleged that the U.S. Navy destroyer escort USS Eldridge was to be rendered invisible (or “cloaked“) to enemy devices. The experiment is also referred to as Project Rainbow.

The story is widely regarded as a hoax.[1][2][3] The U.S. Navy maintains that no such experiment occurred, and details of the story contradict well-established facts about the Eldridge, as well as the known laws of physics.[4] The story has captured imaginations of people in conspiracy theory circles, and they repeat elements of the Philadelphia Experiment in other government conspiracy theories. . . . Read Complete Report