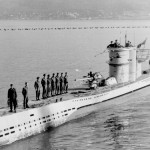 Seven submarines are said to have transported about 350 German Nazi officers to Argentina after World War II. The Argentinians have hired experts in underwater exploration from NTNU to help find the wrecked submarines.

In the 1970s, an Argentinian newspaper editor received a letter from an individual who reported that he had come to Argentina in a submarine after the Second World War. This submarine commander wrote that Hitler had ordered him to fill 10 submarines, each with 50 officers and crew, and to sail to Argentina to found a new Reich. Seven submarines are said to have reached their destination.