The Cryptid Zone: A Menagerie of Cryptozoology

Cryptozoology is the study of animals and other creatures that have not yet been accepted by science as real. In other words, it is monster-hunting. Cryptozoologists look for creatures like sea serpents and the yeti, hoping to gather enough evidence to prove that these beings exist. They also look for more commonplace animals, such as the ivory-billed woodpecker, the giant vampire bat, the inflatable hedgehog and the pygmy elephant. Creatures that are under investigation by cryptozoologists are called cryptids. Although cryptozoology doesn’t get much respect from other scientific disiplines, it has had some spectacular success stories, including the pongo (now known as the gorilla), the okapi (an animal that looks like a cross between a giraffe and zebra), and the coelacanth (a prehistoric fish thought to be extinct).

Cryptozoologists are a specialized branch of monster hunters. Since their ultimate goal is to discover either new species of animal or new subspecies, the science of cryptozoology is rooted in biology. The more a creature shows evidence of being supernatural, the less likely it is that cryptozoologists would be interested in it. Not many cryptozoologists investigate the strangest things like ghostly demon cats, Mothman or werewolves. Ghost hunts are left to the paranormal investigators and a few fringe cryptozoologists. On the other hand, there are very few animals, however mythical they may be, that have never stirred the interest of a cryptozoologist. This is because perfectly real animals have often been obscured by so much folklore that they seemed ridiculous. . . . Visit Site 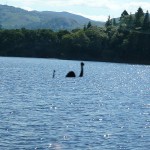 The Loch Ness monster is on vacation in Wisconsin — and state officials want the legendary lady to leave. . . . Read Complete Report w/photo

Category: The Humor of it All / Tags: Loch Ness Monater, Nessie, Wisconsonriver
Site built and maintained by Possum Holler Studios