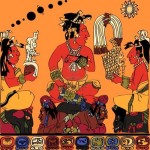 Photo: Stash for the Afterlife
A photograph of a stash of cannabis found in the 2,700-year-old grave of a man in the Gobi Desert. Scientists are unsure if the marijuana was grown for more spiritual or medical purposes, but it’s evident that the man was buried with a lot of it. CREDIT David Potter, Oxford University Press SOURCE Discovery News

Dec. 3, 2008 — Nearly two pounds of still-green plant material found in a 2,700-year-old grave in the Gobi Desert has just been identified as the world’s oldest marijuana stash, according to a paper in the latest issue of the Journal of Experimental Botany.

A barrage of tests proves the marijuanapossessed potent psychoactive properties and casts doubt on the theory that the ancients only grew the plant for hemp in order to make clothing, rope and other objects.

They apparently were getting high too. . . . Read Complete Report

The world’s oldest stash of marijuana was found in a tomb in China. According to the Journal of Experimental Botany, the cannabis is about 2,700 years old.http://www.weirdasianews.com/2012/08/20/worlds-oldest-marijuana-stash-china/