Since the 1850s, engineers have been experimenting with powered lighter-than-air flight, essentially balloons with steering and propulsion. Like other early aeronautical experiments, the trial-and-error period was lengthy and hazardous. . . . Read Complete report with lots of photos.

Image: Aerial view of the USS Akron over Washington, D.C., in 1931, with the long north diagonal of New Jersey Avenue bisected by the balloon and Massachusetts Avenue seen just beneath the ship. (Library of Congress) (Public Domain) 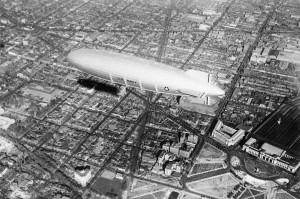