Spy VS Spy and The Litvinenko Inquiry (w/videos) 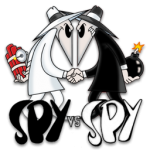 “The Spy vs. Spy characters have featured in media such as animated television series, merchandise such as action figures and trading cards, and video games.” . . . SOURCE Wikipedia

As a child of the ’50s and ’60s and a veteran of the Cold War and Cuban standoff Mad Magazine and the “Spy VS Spy” comic strip was all part of growing up in those uncertain times.

I am using this report on real spies of this era to reflect on the part of the cold war we never hear anything about. The chance to stop and laugh at the stupity of it all. Spy VS Spy did take that time – and does still – accomplish that incredibly task completely without dialogue  But the point of every strip or single cartoon is always clear. Stupidity. .

I subscribed to Mad Magazine back in the late 1950s and early 1960s and when it arrived I always turned to “Spy VS Spy” first.  I hope a little tip-o-the-hat to those pioneers at Mad, a Magazine which has never been equaled in its field, and “Spy VS Spy” which has never been topped, brings flashback memories to those who were there “back-in-the-day” and for those too young to remember, check it out I guarantee you’ll become a fan. . . . EDITOR [See Video and link at end of this report].

from the Eastern London Times

Hackney and Tower Hamlets have appealed for Government help over their liability  for a share of a £4m bill for an inquest into the death of former KGB agent Alexander Litvinenko.

The two East London borough, along with Islington and Camden, the two boroughs are currently in line to cover the total costs of the inquest, which is due to take place at St Pancras Coroner’s Court.

Litvinenko died of suspected Polonium poisoning in 2006 at University College Hospital (UCL). He is believed to have consumed the substance while meeting with former KGB colleagues. . . Read Complete Report