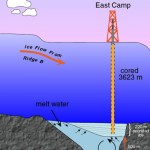 After 30 years spent drilling through a four-kilometer-thick ice crust, researchers have finally broken through to a unique subglacial lake. Scientists are set to reveal its 20-million-year-old secrets, and imitate a quest to discover ET life.

The Vostok project breathes an air of mystery and operates at the frontiers of human knowledge. The lake is one of the major discoveries in modern geography; drilling operations at such depths are unprecedented; never before has a geological project required such subtle technologies.

The main inspiration for the project – the Russian scientist who posited the lake’s existence – died just six months before the moment of contact with the lake’s surface. Now, the whole world is looking to Lake Vostok for crucial data which might help to predict climate change.

“Yesterday [on Sunday] our scientists at the Vostok polar station in the Antarctic completed drilling at depths of 3,768 meters and reached the surface of the subglacial lake,” RIA Novosti reported, quoting an unnamed Russian scientist. . . Read complete report