Treasure at the Alamo (Video Report)

Featured Image: The entrance to the Alamo in San Antonio Texas.  This site is a mecca for all Texans. CREDIT: Dennis Crenshaw (may be used by anyone as long as included with a link back to this page).

Is there a hidden treasure somewhere inside the 300-year-old Alamo? 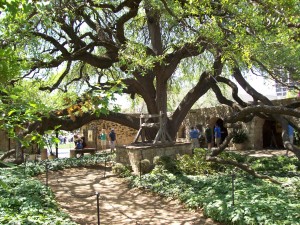 Image: Old well located on the grounds of the Alamo.  CREDIT: Dennis Crenshaw. Feel free to use with link back to THEI.

“Remember the Alamo!” The famous battle cry was immortalized in history. But for some, the full story of the Alamo has yet to be told. Legend has it that in the shadow of the Alamo’s old mission, a treasure remains buried, a secret which dates back to 1836, the year of the famous battle. That January, a group of rugged frontiersmen made their way across southern Texas. By some accounts, they were loaded down with a fortune in silver and gold. It was called the “San Saba Treasure,” and it’s said to be worth millions of dollars.

The men, led by Colonel Jim Bowie, were headed for the Alamo. The treasure was intended to finance the Texas revolution for independence from Mexico. Two months later, Bowie and 188 other men, including Davy Crockett, made a courageous stand at the Alamo against 6,000 well-trained Mexican troops. Not one of the defenders survived to tell the tale, but the legend of the treasure lived on. . . .  Read Complete Report

Since the 1700’s, stories of abandoned or lost Spanish mines and buried treasure in San Saba and adjacent counties have fired the imaginations of thousands of treasure seekers. The following items, from the San Saba News, convey well the excitement these stories generated around the turn of the century .

Mr. A. Fitzgerald, a capitalist of Mexico, who has experience as a miner, has purchased of Mr. Rufe Hoover of Hoover’s Valley, 640 acres of land for which he paid $10,000. He says the signs of gold and silver are very promising. A specimen of the silver ore may be seen at his office.

In personal interview with Mr. Fitzgerald, he informs us that he has 45 years experience as a miner, and he believes his purchase will realize millions of dollars. That the specimens indicate rich gold and silver both; that the veins being fissure veins are inexhaustible. He thinks, are at least two miles long. The purchased land is mountainous, and about 14 miles southwest of Burnet. Mr. Fitzgerald has a partner whose interest is one fourth. He will return next week with an eminent French chemist, and will begin operations soon thereafter as possible.. . . Read Complete Report