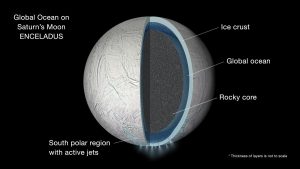 from The Daily Galaxy

Strange flying-saucer-shaped moons embedded in Saturn’s rings have baffled scientists studying images transmitted by the ESA’s Cassini Spacecraft. Research suggests that the oddly shaped moons, Pan and Atlas, are born largely from clumps of icy particles in the rings themselves, a discovery that could shed light on how Earth and other planets formed from the disk of matter that once surrounded our newborn sun.

Observations by NASA’s Cassini spacecraft revealed the moons Atlas and Pan, each roughly 12 miles (20 kilometers) from pole to pole, have massive ridges bulging from their equators some 3.7 to 6.5 miles (6 to 10.5 kilometers) high, giving them the classic Earthly UFO appearance.

At first glance, one could assume that fast rates of spin might have stretched Atlas and Pan out into such unusual shapes, just as tossing a disk of pizza dough flattens it out. But astronomers discovered that each takes about 14 hours to complete a rotation — not nearly fast enough to cause the flattened, disk-like shape. . . . Complete  Report