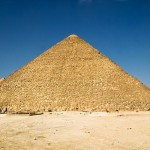 The secret gates at the heart of the Great Pyramid may be opened for the first time in 2012, a British robot company believes – solving a mystery that has puzzled archaeologists since 1872.

Scoutek UK had already begun exploring behind the gates earlier this year – and produced the first-ever images from behind the gates using a ‘micro snake’ robot. But the exploration was halted by the recent unrest in Egypt.

Egypt’s Supreme Council of Antiquities stopped granting permits for research such as the Djedi robotic exploration of the Great Pyramid.

But it has recently started granting permits again.

‘We’re still waiting for permission to return to the pyramid,’ Whitehead told Mail Online today. ‘In the meantime, we have been working on enhancing the robot.’

‘The main plan is to carefully survey and document the shafts, to gather as much information as possible to allow archaeologists to determine their purpose.  We also still plan to look beyond the blocking stones at the ends of the shafts, if it is safe and practical to do so.’ . .Read more