Today the National Archives and Records Administration, responsible for maintaining such filings, said no such executive order was ever signed or filed, confirming WND’s report Wednesday. 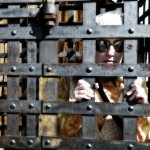