Can we live farther away from the Sun?

Researchers from the Pennsylvania State University (USA) have proposed new borders of the habitable zone for earth-type planets. Using as a basis the corrected absorption coefficients of molecules of water and carbon dioxide, they came to the conclusion that potentially “habitable” planets should be looked for farther away from a star than it was previously considered. . . . Read Complete Report

Category: Advanced Science and Such / Tags: can, farther, live, Sun, We 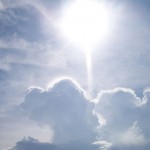