From the Cumberland Cave Web Site

CUMBERLAND CAVERNS is one of the most extensive caves known in Tennessee. Portions of this system were originally known as Higgenbotham Cave and Henshaw Cave, but integration of these two caves plus considerable exploration of previously unvisited sections has in the past several years considerably enlarged the cave.  More than 32 miles are now known.

Aaron Higgenbotham, a surveyor, discovered Higgenbotham Cave in 1810.  Venturing into the cave alone, he was trapped for three days on a high ledge when his torch went out.  According to local legend, when a rescue party reached him, his hair had turned white.. . . Visit Web Site page.

Bluegrass Underground is a musical adventure series that shines a light on purveyors of musical authenticity in a space unlike any other on (or under) earth. Bluegrass Underground emanates from the Volcano Room, a subterranean amphitheatre 333 feet below McMinnville, Tennessee at Cumberland Caverns. The acoustic properties of the Volcano Room are singular. In fact the room only resonates at 2 frequencies meaning that experiencing live music there is akin to attending a concert inside a recording studio. . . . Visit Web Site

Joe Elmore travels to Cumberland Caverns to find out about the Bluegrass Under Ground Concert Hall, 300 feet below the ground.

Redditor Evilenglish was helping his family clear out his grandparents’ old farmhouse in Tennessee last week when he discovered a block of concrete on the floor of a closet under a staircase.

“This was very out of place since all of the downstairs flooring is hardwood,” he wrote. “I pushed the carpet back further and saw a round cap with a circle indentation on it. I pulled off the cap and…A Secret Safe!” . . . Read Complete Report

In December 2005, Fred Strunk was arrested for his part in constructing and operating a secret marijuana farm in a cave under their house.  Their pot farm was located on Dixon Springs Road in eastern Trousdale County, Tennessee.  This area is about 40 miles northeast of Nashville.  Here is the story w/ photos. 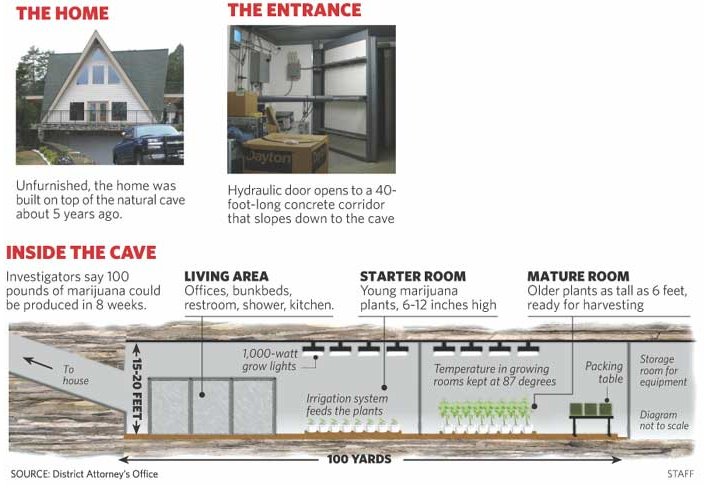