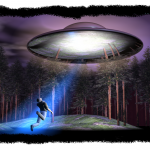 The Travis Walton abduction is one of the three or four abduction cases that I believe has been proven by any reasonable doubt to have actually occurred.  While hosting “Unraveling the Secrets” it was my pleasure to have been able to visit on the air with Travis. He seemed to me to be truthful in every thing he said in telling his horror story. (A link to that interview appears below). . . . EDITOR

DIG DEEPER: Interview of Travis Walton on “Unraveling the Secrets”