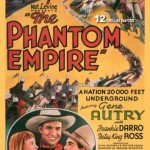 I know this won’t be for everybody, but it is a part of Subterranean Worlds History. And for those of you who didn’t get enough you can find the other parts on youtube! . . . EDITOR

This is it — the one that Mr. Gravy tried to buy from us “name your price” — the original, wonderful PHANTOM EMPIRE serial that inspired so many sci-fi extravaganzas afterward. The idea was apparently dreamed up by one of the producers while seated in the dentist’s chair under the influence of laughing gas. This is a serial like no other. Star Wars fans, take note — words from the title were lifted for both THE PHANTOM MENACE and THE EMPIRE STRIKES BACK — and you want to know why Darth Vader really breathes like that? Serial fans know it’s because he’s wearing a Muranian oxygen helmet! Betsy King Ross was a real-life trick rider, tho she doesn’t get to do too many stunts here — and this was Gene Autry’s first appearance onscreen. The original serial was sadly released without a musical score — this edition — which we would not sell off at any price — features restored picture and a full score of period music which helps draw you into the action. Scenes are tinted sepia for the surface world, and silver-blue for underground Murania. Available at www.serialsquadron.com as a 3-disk DVD set.