Tag Archive for unplugged on UFOs 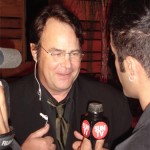 One of the best known figures in the world to actually come out “for UFOs” in a big way is Dan Aykroyd.  And as this full link video proves he not only walks the walk but he talks the talk. . . EDITOR

One of the worlds most famous actors tells about UFOs

I know many of you have seen this already but, for all that didn’t, I love this actor and really admire all of his films. So feel free to enjoy!

One of the worlds most famous and brilliant actors Dan Aykroyd tells about UFOs. You’ve seen him in many Hollywood successful productions such as Ghostbusters or Blues Brothers, Saturday Night Live, Chuck and Larry and Pearl Harbor, to mention a few. He has also been inducted into Canada’s Walk of Fame and in 1994. In 1998  Dan Aykroyd also received an honorary Doctor of Literature degree from Carleton University.

Hollywood star Dan Aykroyd, is a believer in the existence and government cover-up of alien life-forms (just like me), here he look into the phenomenon of UFO sightings. . . . Read Complete Article