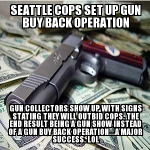 Police officers in Seattle, Washington held their first gun buyback program in 20 years this weekend, underneath interstate 5, and soon found that private gun collectors were working the large crowd as little makeshift gun shows began dotting the parking lot and sidewalks. Some even had “cash for guns” signs prominently displayed.Gun Buyback Goes Bad

Police stood in awe as gun enthusiasts and collectors waved wads of cash for the guns being held by those standing in line for the buyback program. . . . Read Complete Report & Responses

On this January 29,2013 broadcast of The Infowars Nightly News, News Covered: Police Chief: Within A Generation, Guns Will Be Taken Off The Streets. BACKFIRE: Seattle Gun Buyback Turns Into Gun Show; Collectors Waved “Wads of Cash” At Those In Line. Milwaukee County sheriff: Don’t wait for the police; arm yourselves. Father of Oregon terror suspect says teen suffered identity crisis when brainwashed by FBI. Gov. Quinn signs bill that lets illegal immigrants get driver’s licenses. U.S. plans to add drone base in West Africa. Over Forty Children Paralyzed by Vaccines in One Village. 1776 Worldwide!

Inside the NATO Summit

‘No cash for NATO adventures in Afghanistan, but Pentagon stays’

And, as protests unfolded in the streets outside the NATO summit – some big announcements have been made inside. The talks mainly focused on Afghanistan and missile defense in Europe – with the bloc’s chief saying the shield is up and running with ‘interim capability’. RT’s Gayane Chichakyan reports. And also to discuss the implications of what’s been achieved at the NATO summit so far RT talks to Asia Times roving correspondent Pepe Escobar. . . . SOURCE

Thousands of NATO protesters demanding an end to costly and destructive wars marched in Chicago Sunday where the leaders of more than 50 nations were discussing the withdrawal from Afghanistan.

Despite sweltering heat and looming thunderstorms, the marchers set off banging drums and blowing bubbles heading for the lakefront convention center where the two-day summit was being held.

They were joined by a group of veterans, many dressed in combat fatigues, who said they were marching for peace and planned to turn in their medals. . . . Read Complete Report

‘Life over war’: US veterans return medals at NATO summit

Updated 9 p.m. ET: CHICAGO — Dozens of anti-war veterans tossed their medals onto a Chicago street Sunday near where NATO began its two-day summit, calling them “representations of hate,” “lies” and “cheap tokens,” and with some making emotional pleas for forgiveness from the people of Iraq and Afghanistan.

With many dressed in military fatigues, they had filed through the streets in formation, chanting “N-A-T-O, NATO has got to go,” and “No NATO, no war, we don’t work for you no more,” leading about 2,000 protesters on a 2.5-mile march. . . . Read Complete Report w/video

Go to  Occupy Wall Street for continuing reports. This page will be updated also . . . 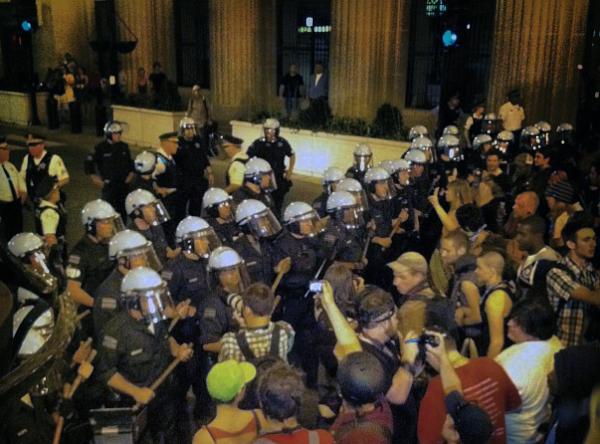 While tens of thousands are in Chicago protesting NATO and many more are marching in the streets of Quebec, the action in your city must not stop! NOW IS THE TIME TO AMPLIFY!

#SolidaritySunday: Fight Back Against State Terrorism!

Last week, Chicago police officers promised ¨billy clubs to the fucking skull¨[Video below in 5/19/20 coverage] to a group of activists they’d pulled over without cause in the South Side neighborhood of Bridgeport. The activists recorded the encounter with a cell phone and the video spread virally across the internet. Now, three of those Occupiers are locked up on charges of terrorism that witnesses, lawyers, and family say are ridiculous. Lawyers for the accused say CPD planted evidence. . . .

Across Chicago, activists and bystanders report being stopped on the street without cause and questioned about Occupy Chicago and the NATO protests. In addition to local police, the Secret Service, FBI, and DHS, at least 40 federal agencies are reported to be coordinating the suppression of the NATO counter-protests. The military presence includes blackhawk helicopters and other aircraft that have been openly patrolling Chicago’s skyscrapers for weeks. There have even been several reports of predator-class drone sightings near Chicago, including this one caught on film:. . . Read Complete Report

Update, 1:30pm ET: Protesters are gathering outside the bond hearing. The Sheriff originally allowed only three people to enter before ultimately allowing 10. Bail has been set at $1.5 million each. Mainstream corporate media are reporting that the 3 arrested activists were planning attacks on police stations, the Mayor’s home, and the Obama campaign headquarters — despite the fact that authorities “have provided no evidence of criminal intent or wrongdoing on the part of the activists,” according to a press release for the Chicago chapter of the National Lawyer’s Guild. Chicago Police admit they had infiltrated organizers.

This video shows Chicago police questioning occupiers about Occupy Chicago, the NATO protests, and threatening violence after arbitrarily pulling over their car in the Bridgeport neighborhood of Chicago earlier this week. The video went viral after the activists posted it to social media. Now, three of them are being charged with terrorism in the wake of a warrantless preemptive raid on activists’ homes in Chicago.

An attorney from the National Lawyers Guild describes the video:

They were driving in a car and were pulled over without any kind of justification or reason by the Chicago police department. They were surrounded by police and they were questioned for a very long period of time about what they were doing in Chicago, why they were here to protest, what their political affiliations were, how they identified politically—All kinds of absolutely outrageous questions that certainly do not indicate any kind of illegal behavior because it is not constitutional simply to accuse them of a crime because of a political belief.”

One officer can be heard in the video saying, “We’ll come look for you, each and every one of you.” Police also made references to the 1968 Democratic National Convention in Chicago, where protesters were violently beaten back by National Guardsmen: