From the Cumberland Cave Web Site

CUMBERLAND CAVERNS is one of the most extensive caves known in Tennessee. Portions of this system were originally known as Higgenbotham Cave and Henshaw Cave, but integration of these two caves plus considerable exploration of previously unvisited sections has in the past several years considerably enlarged the cave.  More than 32 miles are now known.

Aaron Higgenbotham, a surveyor, discovered Higgenbotham Cave in 1810.  Venturing into the cave alone, he was trapped for three days on a high ledge when his torch went out.  According to local legend, when a rescue party reached him, his hair had turned white.. . . Visit Web Site page.

Bluegrass Underground is a musical adventure series that shines a light on purveyors of musical authenticity in a space unlike any other on (or under) earth. Bluegrass Underground emanates from the Volcano Room, a subterranean amphitheatre 333 feet below McMinnville, Tennessee at Cumberland Caverns. The acoustic properties of the Volcano Room are singular. In fact the room only resonates at 2 frequencies meaning that experiencing live music there is akin to attending a concert inside a recording studio. . . . Visit Web Site

Joe Elmore travels to Cumberland Caverns to find out about the Bluegrass Under Ground Concert Hall, 300 feet below the ground.

Caves of the World: #5: The Gates of Hell ~ Exploring Mexico’s Sacred Caves

By Markus Becker in Tulum, Mexico

Mexico’s Yucatan Peninsula is dotted with thousands of caves that once housed prehistoric people and later became sacred to the Mayans. German archaeologists and filmmakers are currently involved in a project to explore with modern imaging technology and make a 3-D film of this underwater labyrinth.

A person died here hundreds of years ago. His body fell into the flooded cave and sank into the water. His flesh gradually separated from his bones. Today, he stares at divers out of empty eye sockets. His skull seems to be pushing its way out of the soil, as if he were trying to rise from the dead, to rise up from the sand, shake the tiresome sediment from his bones and escape from the silent darkness. . . . Read Complete Report 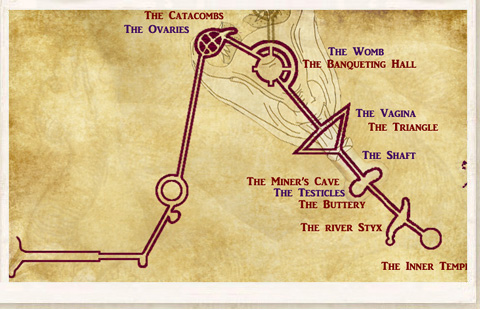 The Clovis First Theory is put to rest at Paisley Caves

Photo: A Clovis projectile point created using bifacial percussion flaking (that is, each face is flaked on both edges alternately with a percussor) SOURCE Wikipedia (Public Domain)

Who were the first humans to enter the North American continent? Were they humans who founded what is known as the Clovis culture over 13,000 years ago? Or did other, totally unrelated peoples precede the Clovis immigrants? This issue has been intensely, if not bitterly debated for decades. The Clovis culture has been seen as the cradle of North American indigenous culture. Now new international research shows that people of another culture and technology were present concurrently or even previous to those of Clovis. Scientists have added a new and dramatic chapter to the history of the peopling of the Americas striking a deadly blow to the “Clovis First” theory that has dominated pre-historic American archaeology for so long. The sensational results are published in the international journal Science.

Evidence that a non-Clovis culture was present in North America at least as early as Clovis people themselves and likely before is presented by an international team of researchers from the USA, the UK, and Denmark.

Who Were the First American Settlers?

New archaeological evidence suggests a paleolithic culture predated the arrival of the Clovis settlers in America 13,500 years ago.

Underground cities talked about as evidence from many sources points to their existence. The Aztecs, Hopi, and other tribes point to their origins from the underground. In other parts of the world many underground cities exist, cultural similarities and legends from the orient, the record of Fusang talks of underground cities in a far away land with a massive canyon. Other sources, from a Mexican treasure map to Spanish records also talk of massive underground caverns where treasure and records of an ancient people are contained. Native hieroglyphs also show evidence of underground cities and caves. Dan and Rick give the most in depth account of evidences and clues that lend credibility to underground cities along the Grand Canyon. You can contact Dan Lowe for information about donating to NAPAA or to purchase his books and research material at: www.tuscoro.com To book a 3 day research trip with NAPAA, spring or summer of 2017 contact Rick at rlzjcraw@yahoo.com All trips include, meals, lodging, informal evening seminars and daily excursions to research sites. $1,500 per person, based on openings and availability.