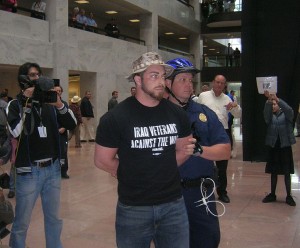 Despite what you may think about America, we still have numerous political prisoners behind bars and plenty of people in jail for victimless crimes. If we don’t hang together, surely we will all hang separately. I saw a need for people to have a place where information about political prisoners could be kept up to date, so I set this url to go to a section of The Freedom Line forums. I hope you’ll take advantage of this to create a thread for someone you know who needs support. Thank you to Lyn Ulbricht and Briana Bundy for your support in the launch of this effort. Get the MOST IMPORTANT BOOK EVER for FREE in every format including audiobook at http://thefreedomline.com/freedom

END_OF_DOCUMENT_TOKEN_TO_BE_REPLACED

Adam Kokesh: How NOT to get a cop’s attention

Does blowing a whistle in a cop’s face help end the police state? Adam asks some hard questions and some not so hard questions at the LAPD protest of the “Africa” shooting.

The most effective thing that I can do to grow the movement is to live on the road for the next year and put as many copies of FREEDOM! directly into people’s hands as possible. For more info please go tohttp://thefreedomline.com and join our email list.

Adam Kokesh: FINALLY Out and About ~ Interview

Adam Kokesh and Stefan Molyneux debate the best way to advance the cause of freedom, increase human liberty and end the tyranny of the state. Political Action, Civil Disobedience, Peaceful Parenting or something else: What is the best method?

Category: Fighting Back / Tags: Adam Kokesh, Adam VS the Man, civil, Disobedience, interview, Out and About, Parenting, Peaceful, Political Action

Anti-government activist Adam Kokesh, who is currently jailed on drug charges and is facing a firearms charge in D.C., says he will someday run for President on a platform of abolishing the federal government.

Jeffrey Phillips shares extremely important facts about Adam’s legal situation (updated from Carey’s 10.28.13 video), the upcoming March to Free Adam from the Man, and other vital news and events.

A dose of reality, courtesy of Obamacare

Adam discusses the failure that is Obamacare and its faulty website, pointing out flaws much deeper in the system than healthcare.gov.
Full podcast: https://adamvstheman.com/podcast/

SPECIAL TREAT FOR Adam VS The Man Fans

Remember when everyone use to ROFLMFAO in the chat rooms?  Well I’ll bet you a $20.00 FED note against a buffalo nickel that you’ll be doing it for real before this great satire short is over. . . Adam we love you, man. . . EDITOR

Hitler finds out he failed at destroying Adam Kokesh

Jeffrey Phillips’ comedic, theatrical rendition of some of the events this past summer.
Jeffrey’s Youtube channel:http://www.youtube.com/user/LABIOCARS