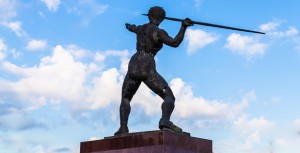 “To cast a javelin into the infinite spaces of the future.” — Franz Liszt

For more than fifty years, DARPA has held to a singular and enduring mission: to make pivotal investments in breakthrough technologies for national security.
The genesis of that mission and of DARPA itself dates to the launch of Sputnik in 1957, and a commitment by the United States that, from that time forward, it would be the initiator and not the victim of strategic technological surprises. Working with innovators inside and outside of government, DARPA has repeatedly delivered on that mission, transforming revolutionary concepts and even seeming impossibilities into practical capabilities. The ultimate results have included not only game-changing military capabilities such as precision weapons and stealth technology, but also such icons of modern civilian society such as the Internet, automated voice recognition and language translation, and Global Positioning System receivers small enough to embed in myriad consumer devices. . . . Continue with DARPA Website.

Why are the elitist working through their leftist lackeys and the controlled media to destroy Donald Trump? They will continue to throw crap at the wall hoping something will stick. It ain’t going to happen Virginia. We are exposing that here on THEI. Just be patient. . As the truth comes out I will no longer be a “Conspiracy Nut”, but what I have always been – a truth seeker and reporter .

Breaking: Trump To Release Secret DARPA Technology To The World

Published on Jan 23, 2017
Donald Trump is going to move forward with his plan to reveal the secrets the globalists have been hiding to the American people.

This DARPA technology is great if it stops wars. But what if its used on Americans? Look back through our past reports and do some research for yourself. And keep in mind this agency works hand in glove with the CIA (Look through our CIA and The Shadow Government Archive Linked below) Do you trust this bunch at all? . your Editor Dennis Crenshaw

Published on Jul 22, 2016
You live in the 21st century. CIA lives in the 25th thanks to Alien technology they uncovered from UFOs. Teach you never head of & will never see anywhere but on our channel. Our countdown to the most advanced 20 begins now.

The Defense Advanced Research Projects Agency, better known as DARPA, held a robotics competition in Miami, Fla. over the weekend. At the two-day event, the world’s best robots were put to the test, competing in tasks designed to help humans in natural or man-made disasters, including opening doors or climbing up stairs, by relying on sensors or cameras to understand their environment. A total of 16 teams competed for the $2 million prize. RT’s Nicholas O’Donovan attended the event and brings us more.

Humans into Robots: Top DARPA Projects That Should Creep You Out (Video Report)

This without a doubt  MUST be added to our “Robots Replacing Humans” file. . . EDITOR

(Phys.org) —DARPA (Defense Advanced Research Projects Agency) is getting closer to its goal of securing robotic hands that mimic the hand’s finer movements, at an affordable cost. A research project has been under way to develop artificial hands; the main goals have been of an economic as well as technical nature; DARPA has been looking for robotic hand systems that offer not only optimal dexterity but can also come at a lower cost than in the past. The high costs associated with effective robotic hands have been $10,000 and up.. . . Read Complete Report

The DARPA ARM Program shows off its dual-arm robot, built by RE2, at the 2012 IEEE International Conference on Robotics and Automation, in St. Paul, Minn. Learn more:http://spectrum.ieee.org/automaton/ro…

The ARGUS array is made up of several cameras and other types of imaging systems. The output of the imaging system is used to create extremely large, 1.8GP high-resolution mosaic of images and video.

The U.S. Army, along with Boeing, has developed and is preparing to deploy a new unmanned aircraft called the “Hummingbird.” It’s a VTOL-UAS (vertical take-off and
landing unmanned aerial system).

Three of them are being deployed to Afghanistan for a full year to survey and spy on Afghanistan from an altitude of 20,000 feet, with the ability to scan 25 square miles of ground surface.