Riot shields could scatter crowds with ‘wall of sound’ 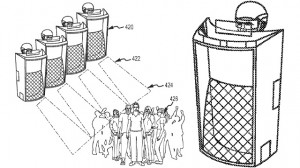 Riot shields could scatter crowds with ‘wall of sound’

RIOT shields that project a wall of sound to disperse crowds will reduce violent clashes with police, according to a patent filed by defence firm Raytheon of Waltham, Massachusetts.

The device looks similar to existing riot shields, but it incorporates an acoustic horn that generates a pressure pulse. Police in the US already use acoustic devices for crowd control purposes that emit a loud, unpleasant noise.

The new shield described by Raytheon produces a low-frequency sound which resonates with the respiratory tract, making it hard to breathe. According to the patent, the intensity could be increased from causing discomfort to the point where targets become “temporarily incapacitated”. . . . Continue