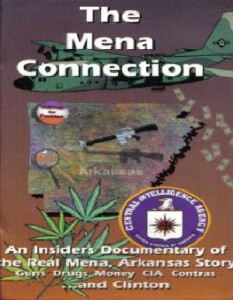 Obstruction of Justice: The Mena Connection

http://jeremiahfilms.com/products/OOJD Two teenagers stumble upon a major drug smuggling operation. The boys are brutally murdered and their bodies placed on railroad tracks to give the appearance of a train accident. Soon, crime scene eyewitnesses vanish and investigations are shut down. The grieving parents are stunned. Corruption involving high level officials from Arkansas to Washington is documented in this incredible true life story. . . . Posted with video.

This is a documentary series that was never aired where an investigative journalist uncovers truth to the rumors about Iran-Contra during the Reagan years, CIA drug trafficking, CIA drug operations in Mena, Arkansas during the Clinton governorship and presidency. It also implies that former president George H.W. Bush, who was vice president during the Reagan years, and was also former head of the CIA was also involved.

Dig further into the THEI Archive on the subject: