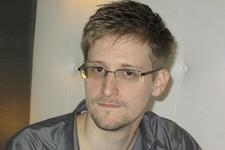 I just wish they would spend as much time and effort rounding up the criminal illegal aliens and shipping them home. Oh, thats right. The Dem-o-rats need illegals and dead people to vote so they can win elections. I almost  forgot. . . . EDITOR

Days after the name Edward Snowden made headlines for being the source behind one of the most significant leaks involving the National Security Agency’s surveillance of Americans, the former employee of the CIA has gone into hiding. The whistleblower, who some are calling a hero, has been fired for violating his company’s code of ethics and now the Obama administration is on the hunt for the leaker. Many believe that Snowden’s fate has already been determined and Michael Brooks, producer for The Majority Report, and Jesselyn Raddack with the Government Accountability Project, weigh in on the Obama administration’s hunt for the Snowden.
Find RT America in your area: http://rt.com/where-to-watch/
Or watch us online: http://rt.com/on-air/rt-america-air/