Eyeballin’ the real Obama. Behind Every Leftist President… Valerie Jarrett

From the Western Center for Journalism JUNE 24, 2013 BY GENE DAILY

Some have called her the most dangerous female on Earth.  Indeed, her influence and leverage in the Obama Administration is beyond healthy levels in a free society. She began her working career under Harold Washington, then Mayor of Chicago. Following the death of Mayor Washington, she continued to work for the city administration serving as “Deputy” Chief of Staff for Richard M. Daley. So when people refer to the Chicago style politics of Obama’s administration, who would be better versed in the meaning of that concept? After all Obama’s job resume is little more than community organizer prior to his election as Senator from Illinois. 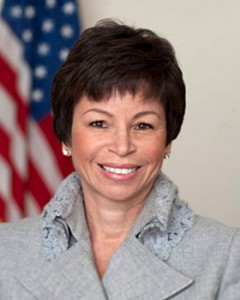 Jarrett seems to have taken the young Obama under her wing and introduced him to many of her influential friends in Chicago, among these Bill Ayers the well known anti-establishment terrorist of the 60′s. There are indications that her father-in-law, also knew of Obama through friends. . . . Read Complete Report