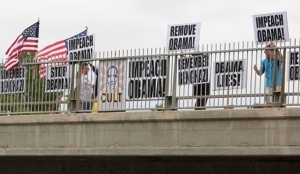 This is a quick update on progress with the Impeach Obama movement. On June 8th there was an overpass rally in Carlsbad, California that received national attention, because a local reporter claimed, exaggerated or not, that that it caused a ten-mile traffic jam. . .. Portion of description uploaded with video.