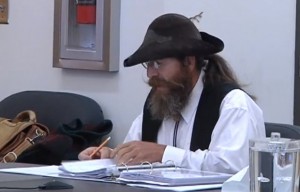 Featured Image: Ernie Tertelgte, The Natural Living Man. Ernie was found guilty after being ejected from the court room for his continual objections. CREDIT:  (Image source: Screen grab via YouTube) SOURCE: The Blaze

I’m not sure whether Ernie is a genus or crazy as a mad hatter, but he sure knows how to handle our ridiculous court system when charged with refusing to participate in one of their money grabbing “licensing” scams. He was ultimately found Guilty, but I think you will agree with me when I say he was still the winner in his battle with the man.

This video is a MUST WATCH . . .EDITOR

It was a packed courtroom on Tuesday for the hearing of Ernie Tertelgte, a Manhattan man who says he’s being wrongly prosecuted for trying to feed himself. . . From description published with video.