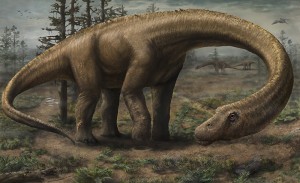 Published on Sept 4, 2014
Drexel University professor Ken Lacovara has recently unveiled a new supermassive dinosaur species he discovered and unearthed with his team between 2005 and 2009. Weighing in at nearly 65 tons, Dreadnoughtus schrani is the largest land animal ever found of calculable mass and also by far one of the most complete skeletons ever found for a dinosaur in this mass range!