In Loving Memory: B.B. King dies at 89 ~The Thrill is Gone 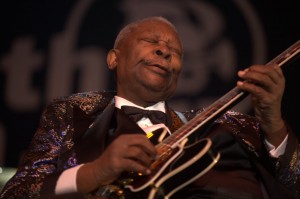 Legendary blues musician B.B. King died on Thursday in Las Vegas, his attorney told The Associated Press. Cause of death was not released. He was 89.

Born Riley B. King in Berclair, Mississippi, and raised by his grandmother, the future “King of the Blues” purchased his first guitar for $15 when he was just 12 years old. He dropped out of school in the 10th grade, and spent much of his early years picking cotton and working as a tractor driver.

While he began singing in a gospel choir at church, the blues took root in King during his teen years. The blues is considered by many to be the only truly indigenous American music, and over time, King would become its foremost ambassador. . . . Read Complete Report

A lot of People can play the blues but there was only one King of the Blues.B.B. . . .EDITOR