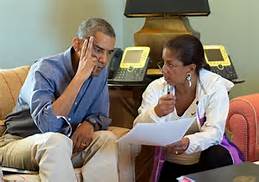 Tucker: Revelation that former Obama national security adviser Susan Rice spied on Trump’s transition team – and lied about it – is the real scandal and shows our government has no serious protection against surveillance of American citizens #Tucker

Barack Obama’s “right-hand” and national security advisor Susan Rice reportedly requested the unmasking of members in Donald Trump’s campaign. However, when asked on March 22nd, in an interview with PBS News Hour about Devin Nunes’s assertion that evidence supported the fact members of Donald Trump’s transition team were surveilled by the Obama administration Susan claimed the she “knew nothing about this” and even found the New York Time’s story from January 20th “perplexing”.

Susan Rice quickly diverted away from the surveillance allegations proceeded to criticize Donald Trump in a number of ways including stating that his administration wasn’t “fact-based”… ahh the irony!

Hindsight is 20/20 but if you look at Susan’s closed body language, heavy breathing (at 2:02), and rapid eye blinking… the signs of lying are abundant.

Hannity: Susan Rice has a lot of explaining to do

Circa News, Bloomberg break down the Susan Rice revelations

On ‘Hannity,’ insight into the new developments on the Trump transition team