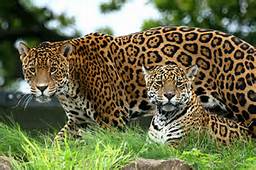 Wikipedia: The jaguar (Panthera onca) is a big cat, a feline in the Panthera genus, and is the only extant Panthera species native to the Americas. The jaguar is the third-largest feline after the tiger and the lion, and the largest in the Americas. The jaguar’s present range extends from Southwestern United States and Mexico across much of Central America and south to Paraguay and northern Argentina. Apart from a known and possibly breeding population in Arizona (southeast of Tucson) and the bootheel of New Mexico, the cat has largely been extirpated from the United States since the early 20th century.

Note “. . .POSSIBLE breading population in Arizona..” ” . . the cat has largely been extirpated from the United States since the early 20th century”.

I say if he is only POSSIBLY here in a small area of Arizona and is a Mexican cat thats a lame reason to not secure our border.  But then you must realize the source of the protest. . . Your Editor Dennis Crenshaw

Wildlife conservation groups are collaborating with a federal government agency to halt construction of the southern border wall by fudging science to claim that unimpeded trans-border corridors are essential to an “endangered species” with 99% of its population in Mexico. Under the plan, large areas of Arizona and New Mexico would be prohibited from erecting a border wall so that jaguars—which don’t even occupy the area—can roam back and forth between the two countries. More than ¾ million acres in Arizona and New Mexico would be designated as critical habitat for jaguars under the federal Endangered Species Act (ESA), which specifically states that critical habitat can only be designated for the United States. . . Read Complete Report

Sub for more: http://nnn.is/the_new_media | Cristina Laila for the Gateway Pundit reports, Far left wildlife conservation groups are collaborating with a federal government agency to stop construction the border wall from being built. They are pushing bogus claims that unimpeded trans-border corridors are essential to an “endangered species” with 99% of its population in Mexico according to Judicial Watch