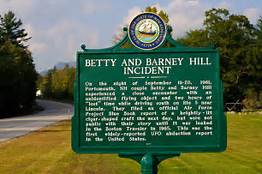 This amazing real Alien abduction story started on the evening of the September 19th through the morning of the 20th when Barney and Betty Hill were driving home down Route 3 coming home from vacation in Canada and northern New York.

After the abduction, Betty and Barney Hill were asked to draw a picture of the Aliens and Betty who had seen the star map was asked to draw out the map of the star system which was unknown at the time, but has now been found by amazed astrologers around the world. The two pictures of the aliens were very similar and the stories were exactly the same from the couple. The dress that Betty had been wearing with the strange pink powder had sat in her closet for some time until scientists around the world started asking for samples which she gladly cut off and sent out.